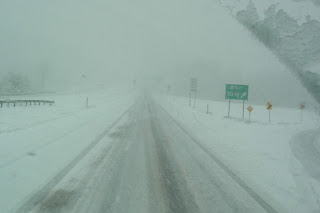 Well, first, I learned that we don’t call them snow tires anymore; they’re winter tires now. Do we need them? The short answer is Yes, at least if we live in Vermont. Or Colorado (too bad I didn’t figure that out when I lived there). Or in any other snowy places for that matter, especially the ones with mountains. If your roads tend to look like this in the winter, it’s a good idea to consider them.

According to Consumer Reports, winter tires have a better grip on snow and ice, and the Vermont DMV recommends them. Ideally, they should be installed before the first snow of the season, and must always be the same on all four wheels.  Folks who live in flatter, less snowy states may prefer to save the extra expense and get by with all-weather tires, which also have the advantage on cleared roads. It isn’t cheap, after all, to purchase an extra set of tires and have them changed over twice every year. Plus winter tires often wear out more quickly. On the other hand, even one crash avoided may be well worth the extra time and money.

Finally, what about studs? Back in the day, when we were driving on hard-packed snow and ice for a good part of the winter, studded tires were a wonderful safety feature, and kept many of us alive and out of the ditch. Nowadays, those wonderful people who clear the roads for us do such a great job that most of us are driving on bare roads in the winter more than ever. Metal studs do improve stopping performance on ice, but make little if any difference on snow, none on bare roads, and are actually worse when the road is wet. Other drawbacks are the irritating noise, and damage to the pavement, which is why many states limit their use to the winter months and some ban them altogether. Vermont trusts our common sense and so has no legal restrictions, but we can help out the highway maintenance crews and their budget by using studded tires only in the winter months, or not at all. You can check the rules for your state or province in the AAA Digest of Motor Laws. (Thanks, AAA!) Honestly, as a general rule, unless you expect to do most of your driving in icy conditions, winter tires without studs are going to be your best choice.

And there you have it – my complete sensible advice. For today, anyway. You’re welcome.

PS Thanks to Anonymous, who raised the very good question ‘Why not just on the drive wheels?’, I went hunting for more on that subject and found this lengthy discussion on Car Talk, illustrated with a cool video, which I am adding to the post for clickability. And because it’s important. Enjoy!

And thanks, Anonymous, whoever you are!

Oh boy, here it is December already. Hard to believe that National Salubrious Driving Day and Driver Safety Month are both over so soon, isn’t it? Do you feel any safer? Would you like to? Well, I’m feeling safer so let me just share a few tips:

First, now that leftovers are gone, it’s time to start thinking about winter tires. We want to make it to the mall and back in one piece, don’t we? If you’re like me, you may have stopped thinking about winter tires years ago, when some smarty pants invented all weather tires. They certainly were convenient, and I think most of us fell for the notion that they were plenty good enough. I know I did. And honestly, I survived for the most part very nicely with my all weather tires through winters in upstate New York, New England, Michigan and even Colorado (although I admit to cheating by buying AWD vehicles in Colorado). So you can imagine my surprise when I arrived in the Northeast Kingdom and discovered that up here they still use winter tires. And do you know what? It works! Our wussy little front wheel drive that spent most of the winters in Colorado hiding in the garage can drive through just about anything now on its tough new winter tires. So if your all weather tires are scaring you out there on the ice and snow, check out a set of winter tires. I think you’ll like them.

I was also pretty excited to learn that winter tires with studs are still an option. When I was a young driver we always had studded snow tires that got us through the winter even on those old rear wheel drive cars. But that was before the birth of all weather tires, and we were driving on roads that were covered with a layer of snow or ice (or both) more often than not during the winter. And as it turns out, while studs were keeping us on the road, they had a tendency to wreck the pavement. So some states have banned them altogether, and most of those that allow them limit their use to the winter months. As usual, the rules vary from state to state. If you’re interested, you can check this chart compiled by the Rubber Manufacturers Association for the regulations in your state, or any state you plan to visit. But first, I have to say that although studs were terrific back in the day, they have their drawbacks now that the art of clearing snow from the roads leaves them clear and dry for a good part of the winter. And the studs that give you better traction on icy roads, don’t help at all on dry roads, and are worse when the roads are wet. So as fondly as I remember them from the good old days, I can’t say that I’d suggest you bother with studs on your winter tires today. Ah, but the winter tires themselves have my enthusiastic support. They are so worth it!

Who says we can’t extend our salubrious driving habits into December and beyond?