Here it is practically February already, and still I haven’t shared the good news from from my terrific New Years visit to NYC with the family, so here we go: I am happy and astonished to report that it was oddly quiet and peaceful, for New York. Would you like to know why? Look … 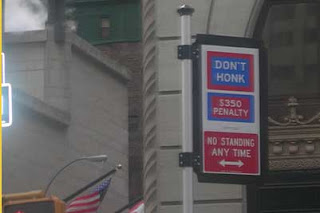 Yes, signs that threaten a $350 fine for honking are posted prominently all over the city. Great idea, New York! Horns do have a purpose, but annoying everyone within earshot because another driver is annoying you is not it! To quote Mother Rider (by way of an excerpt from Riders on the Road: How to Laugh More and Rage Less with The Rider Method):

Save your horn to alert your fellow motorists to danger,
not that you’re mad. They really don’t care and it’s annoying to the others around you.

And to quote a genuine New Yorker, Irwin Arieff (in an excerpt from Congestion Honking, The New York Sun, April 11, 2008):

Horns were invented to help prevent accidents, not to give people migraines.

Mind you the law doesn’t prohibit honking ever, only in a non-emergency situation, which in my view is just right. Lord knows, who among us doesn’t need the occasional helpful reminder that we’re about to smear someone in our blind spot while making a theoretically innocent lane change? Or backing up into one of those invisible posts or short little cars or worse yet, people? By all means there are times when we need those horns and need them immediately! Which is why I hate that they’re in different spots in different vehicles, but that’s a subject for another post.

For now, let me just be clear that Mother R approves of the honking ordinance in New York, and others in cities like Atlanta, Chicago, Denver, Los Angeles, San Antonio and many more (check the article link above for the complete list). Because while she still believes that they ought to be unnecessary because we ought to be smart enough to know better anyway, she must admit that at least in New York they have made a big difference. So despite Mr. Arieff’s contention that the city can and should become even quieter with increased enforcement, she is grateful to the many New Yorkers who comply for a more pleasant visit as compared to the constant deafening noise she remembers from the last time she was there many years ago.

And for you honkers (especially the ones who are doing it to urge the car in front of you to block the intersection) and you honkees who are intimidated by the bullies behind you into blocking the box although you know better, stop it right now, both of you! To quote once again from Riders on the Road: How to Laugh More and Rage Less with The Rider Method:

Don’t ever block the intersection. I’m sorry you’re stuck in traffic, but it’s not their fault and you’re not allowed to punish them for it.

And from Mr. Arieff, the New Yorker (quoting from Congestion Honking again):

honking creates congestion by pressuring drivers to
“block the box” – to zip into an intersection, rather than wait.

But once again, New York comes to the rescue with helpful signs everywhere that threaten a fine and points on your license for bad box blocking behavior. Like this… 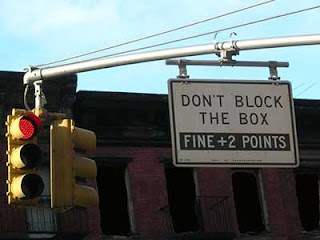 Combined with actual boxes painted on the street to define the intersection, these signs and the penalties that go along with them are supposed to reduce traffic congestion. Do they work? Sadly, no, at least so far as I was able to observe. Come on, New Yorkers, you can do better than that! And don’t think you folks who live elsewhere are exempt from Mother’s orders just because you don’t have signs and boxes painted on your streets. You know better.

Let’s recap, shall we? These are the two simple rules for today, rules we will observe every day:
Isn’t it lovely to be nagged about something other than distracted driving for a change?
You’re welcome!