Mother is NOT scared of spiders. Really. Well, as long as they don’t bite her. But she doesn’t want them in her car either. And neither should Mazda6 owners, so Mazda is recalling 65,000 of them (the cars, not the spiders; who knows how many spiders?) to be inspected, and any unwelcome residents evicted. According to this alarming report in the Los Angeles Times (Spiders may have entered Mazda cars before assembly, expert says), the little buggers have been found hiding in a tiny hose near the fuel tank, and if they get out of hand could cause fuel leaks and even fires. Yikes! Thank goodness my Mazda is a truck! But before you Mazda6 owners freak out totally, I hasten to add that there have been no reports of spider bites, cracked gas tanks, or related accidents or injuries as a result of this problem. So if the little stowaways aren’t causing any trouble, why all the fuss? How were they found in the first place? Did they leave a mess? Or make too much noise? Did their mothers report them missing? The article doesn’t say. Sorry.

Would you like to see a picture? Here’s the illustration from the LA Times: 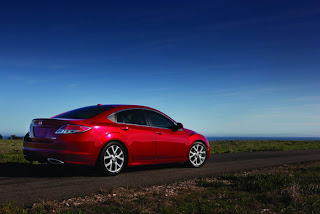 Oh, did you mean the spider?

Here you go, courtesy of the University of Nebraska-Lincoln, which also has the complete spider scoop on its website, for those who need to know more: Spider Bites? Look for a Sac Spider. 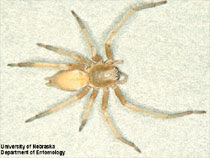